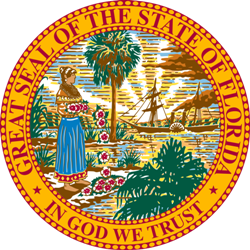 Shortly before Election Day, Smart Politics discussed which states have hosted the most competitive U.S. Senate races each cycle over the last century – and posited which states could set a new record this cycle.

With the recount in Florida’s race now complete, the 0.12-point victory by Republican Governor Rick Scott over three-term Senator Bill Nelson became not only the most narrowly-decided race of the election cycle, but also the closest U.S. Senate race out of the 38 conducted in Sunshine State history.

And it also joins the 2004 contest between Republican HUD Secretary Mel Martinez and former state Education Secretary Betty Castor as the second time in state history in which Florida has hosted the nation’s most competitive U.S. Senate election of the cycle. That race was decided by 1.1 points in favor of Martinez.

In addition to the 1988, 2004, and 2018 contests, only three other Florida U.S. Senate races were decided by less than five points in the direct election era:

Florida’s 2018 contest was the only U.S. Senate election to set a new state record this cycle – and the only race to be decided by less than a percentage point.

Elections for the office in four other states had victory margins of less than five points: Arizona (2.4 points), Texas (2.6), West Virginia (3.3), and Montana (3.6). [Pending the result of the upcoming run-off in Mississippi’s special election].

Most states have enjoyed at least one extremely competitive U.S. Senate election over the last century, with 37 states hosting at least one election decided by less than one percentage point.

Smart Politics reviewed the nearly 1,800 direct elections that have been conducted for the U.S. Senate to determine the most closely decided contests in each of the 50 states.

The most narrowly decided races in seven states ended up with victory margins tallying less than one-tenth of a percentage point.

Of the remaining 13 states, the closest U.S. Senate race in five states resulted in victory margins of more than two points with Arkansas’ the largest in the nation at 5.4 points (Republican Tim Hutchinson over Democrat Winston Bryant in 1996). 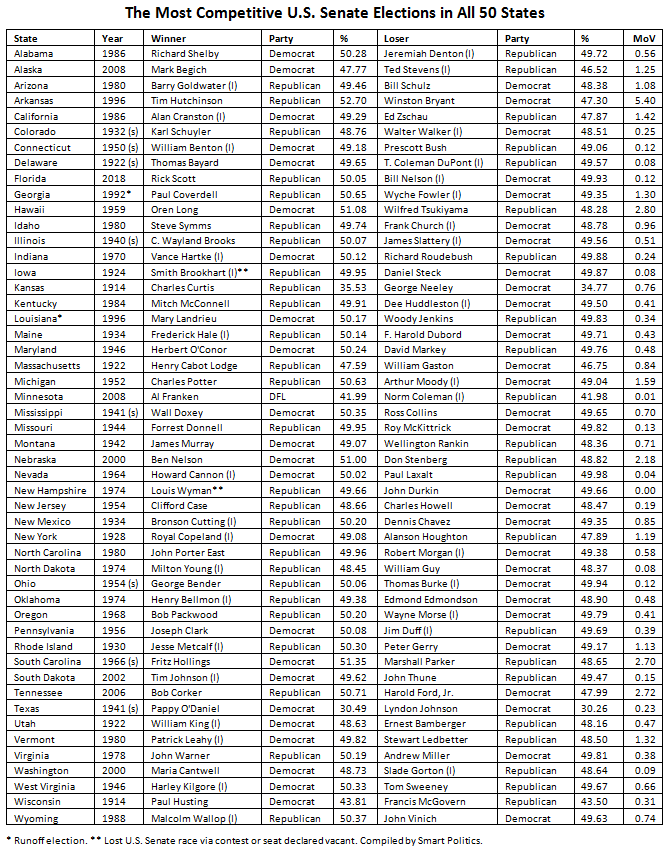 Prior to Florida’s 2018 race, the last two state records to fall came during the 2008 cycle with voters in Alaska and the aforementioned race in Minnesota between Franken and Coleman treated to historically close finishes.

In Minnesota, Franken’s 0.01-point win over Coleman ended an 84-year record dating back to the Election of 1924 when Republican Congressman Thomas Schall unseated Farmer-Laborite U.S. Senator Magnus Johnson by a 0.95-point margin.

Other state records set during the 21st Century came in Nebraska in 2000 (Democrat Ben Nelson by 2.18 points over Don Stenberg), Washington in 2000 (the previously discussed race between Cantwell and Gorton), South Dakota in 2002 (Democratic U.S. Senator Tim Johnson by 0.15 points over Republican U.S. Representative John Thune) and Tennessee in 2006 (Republican Bob Corker by 2.72 points over Democratic Congressman Harold Ford, Jr.).