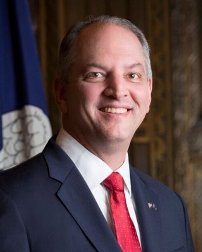 Since the election of Barack Obama in 2008, Democratic statewide victories in the South have been scarce – although the party is lining up strong candidates that should make each of the three gubernatorial elections to be held in November 2019 fairly competitive.

For starters, Louisiana Democratic Governor John Bel Edwards (pictured) has generated strong approval ratings (+13 net approval per Morning Consult’s October 2018 survey) that have to this point left most of the state’s prominent GOP officeholders gun-shy and opting not to launch a challenge.

In neighboring Mississippi’s open seat gubernatorial race, Democrats landed popular four-term Attorney General Jim Hood, who along with Edwards, is one of just three Democrats in the Deep South to win statewide office since 2009.

Scoring two wins for statewide office in the Deep South generally this cycle, let alone for the top executive office, would be quite an achievement for Democrats who have struggled mightily in the region over the last decade.

Each of the four contests the GOP failed to win either involved a Democratic incumbent or was an open seat race:

Two of the four contests listed above also involved Republican nominees who were embroiled in well-publicized controversies (Vitter and Moore) that helped enable Democrats to pick up the seats.

Democrats made some inroads in the Deep South during the 2018 cycle, particularly in Georgia where several nominees for statewide office came up just a few points shy of victory:

When looking at the South generally – folding in the remaining nine states (Arkansas, Florida, Kentucky, North Carolina, Oklahoma, Tennessee, Texas, Virginia, and West Virginia) – Republicans have been victorious in 260 of 307 non-judicial statewide elections since 2009 (84.7 percent).

Eleven of these 47 Democratic victories have come in West Virginia, with 10 in North Carolina, nine in Virginia, seven in Kentucky, four in Arkansas, and two in Florida. [Democrats have failed to win such a statewide race in Oklahoma, Tennessee, and Texas].

However, only seven of these 47 wins have been pick-ups and only one of those unseated an incumbent. In addition to the pick-ups notched by Doug Jones in Alabama and John Bel Edwards in Louisiana documented above, the other five are:

Twenty-nine victories were by Democratic incumbents with 11 others for open Democratic-held seats.

Overall, Democrats have won nine gubernatorial races in the South since 2009 plus nine for attorney general, eight for U.S. Senator, five for auditor, five for secretary of state, four for treasurer, two for lieutenant governor, two for agricultural commissioner, and one each for insurance commissioner and superintendent of public instruction.