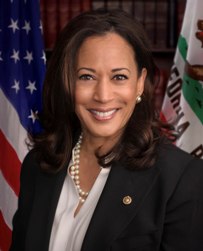 Of the five Democratic candidates who have formally launched their 2020 presidential bids, two are from the West: California U.S. Senator Kamala Harris (pictured) and Hawaii U.S. Representative Tulsi Gabbard.

With many more members of their party yet to jump in the race, it is unlikely that Harris and Gabbard will be the only westerners making their case to Democratic voters (and fundraisers) across the country.

None of these candidates mentioned are currently favored to win the nomination over, say, former Vice President Joe Biden, but could the time be right for a westerner to finally land on a Democratic presidential ticket?

[Note: Some Democratic nominees were born in the West, such as John Kerry (Colorado) and Barack Obama (Hawaii), but none rose to political prominence in the region].

To be sure, in recent election cycles, the Democratic Party has established a noticeable foothold in the West – creating a strong regional bench that helps to explain why so many westerners may run for the nation’s highest elected office this cycle.

But the closest Democrats have ever come to putting forth a Western presidential nominee are Plains state politicians William Jennings Bryan (Nebraska, 1896, 1900, 1908) and George McGovern (South Dakota, 1972) and southerner Lyndon Johnson from Texas (1964). Definitely west of the Mississippi, but not the West.

Democrats have never nominated a Westerner for the vice-presidential slot – unless one counts the Southern Democratic ticket in 1860. [In that cycle, U.S. Senator Joseph Lane from Oregon was nominated as the running-mate on John Breckinridge’s pro-slavery ticket].

There have been a handful of Democratic presidential candidates from the West who have had a decent run at the nomination, but fell short.

The aforementioned Joseph Lane of Oregon was placed into nomination at the 1852 and 1860 Democratic conventions, peaking at fifth (14 votes) and fourth (20.5 votes) place respectively.

U.S. Supreme Court Justice Stephen Field of California also received support at two conventions reaching a high of 13 votes and fifth place in 1868 and 65.5 votes and fourth place in 1880.

Former Treasury Secretary William McAdoo (who became a westerner later in life, winning a U.S. Senate seat from the Golden State in the 1930s) ran second at the 1920 DNC and led for several ballots at the chaotic 1924 convention.

It would be nearly 50 years before the next Democrat from a western state made any waves at the DNC. In 1972, Washington U.S. Senator Scoop Jackson came in a distant second in balloting behind George McGovern with 525 delegates.

Brown, who had also run for president in 1980, came in second in the 1992 race for the Democratic nomination with 596 delegates.

Even if there was a geographical advantage in selecting a presidential or VP nominee, there will likely be very few electoral votes up for grabs in the West.

In a normal cycle, Democrats will likely garner 83 votes from California, Hawaii, New Mexico, Oregon and Washington while the GOP can count on 30 in Alaska, Arizona, Idaho, Montana, Utah, and Wyoming. [In a GOP-favored cycle, New Mexico, Oregon and Washington could be competitive as might Arizona in a Democratic-favored cycle].

That leaves just 15 electoral votes up for grabs in the region: Colorado (nine), Nevada (six).