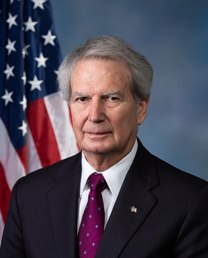 The maverick former Democratic state representative and Republican U.S. House member from North Carolina’s 3rd Congressional District was considered to be one of the more principled members of the chamber – willing to work and vote with the other side of the aisle when his policy preferences did not align with party leadership.

All told, Jones served the state’s coastal 3rd CD for 24 years, 1 month, 8 days – the second-longest tenure among the 60 Republican U.S. Representatives to serve the state since the 19th Century.

Only three other North Carolina GOPers were elected to 10 or more terms:

To date, just two other Republicans served more than 15 years:

With Jones’ departure from the chamber, the longest-serving Republican members of North Carolina’s current U.S. House delegation are Virginia Foxx of the 5th CD and Patrick McHenry of the 10th CD. Each are in their eighth term.

The first Republicans were elected from the state after the Civil War in 1868.

Ten other Republicans won seats from the start of the 20th Century until the passage of the Civil Rights Act in 1964 – with only the aforementioned Jonas and Broyhill winning more than two terms.

Since 1964, 27 additional GOPers have won U.S. House seats from the Tar Heel State.

With Jones’ passing and the fate of the 9th CD 2018 election still up in the air, North Carolina now has two U.S. House vacancies.