Major parties in nine states have not nominated a woman to the U.S. Senate this century

The 2020 cycle has seen a record number of women from a major party run for president – Democrats Kamala Harris, Tulsi Gabbard, Elizabeth Warren, Amy Klobuchar, Kirsten Gillibrand, and Marianne Williamson – although there are probably less than even odds that one of these candidates will become their party’s nominee.

And, as a recent Smart Politics report noted last week, it may prove difficult in 2020 to equal or best the record 23 Democratic and Republican women who received U.S. Senate nominations last cycle.

One of those women, GOPer Cindy Hyde-Smith, helped get Mississippi off the schneid in 2018 as it became the last state to see a woman who identified with a major political party make it to the general election ballot. [Note: Though Hyde-Smith was technically not a Republican nominee in Mississippi’s 2018 non-partisan special election; the race resulted in a top-two runoff with Democrat Mike Espy, as no candidate received a majority of the vote on November 6th].

In addition to Hyde-Smith, the other women in the U.S. Senate scheduled to defend their seats in 2020 are Republicans Martha McSally of Arizona, Joni Ernst of Iowa, Susan Collins of Maine, and Shelly Moore Capito of West Virginia plus Democrats Tina Smith of Minnesota and Jeanne Shaheen of New Hampshire.

It is a bit early to predict how many other women will emerge as nominees by next year, although the door seemingly swung open for Congresswoman Liz Cheney of Wyoming to graduate to the upper legislative chamber, with Senator Mike Enzi’s retirement announcement last weekend.

Over the decades, the state with the largest number of women to receive major party U.S. Senate nominations is Maine with 18; Senator Collins hopes to add to that total next year.

California has produced 15 such nominees followed by New York and Washington with 11 each, Missouri with 10, and Hawaii, Maryland, and Michigan with eight. 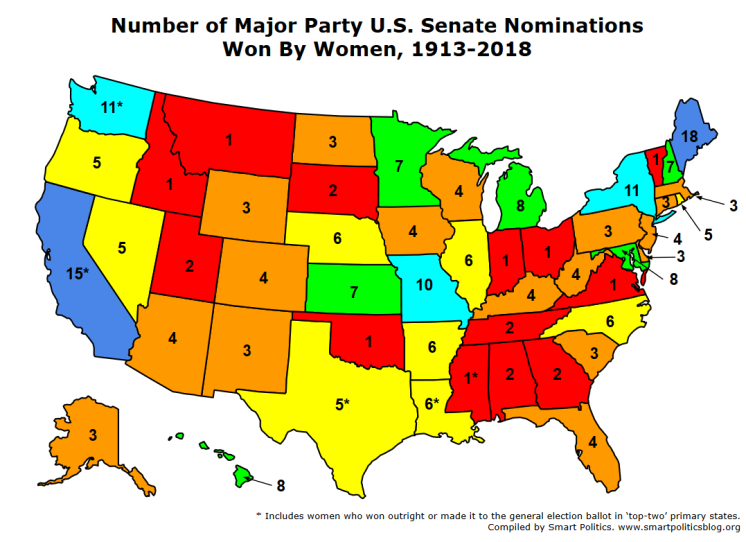 In total, women have been nominated by major parties to the U.S. Senate 237 times during the direct election era.