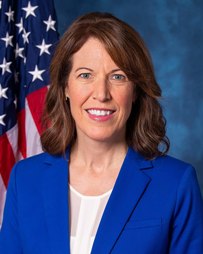 Former Iowa U.S. Representative David Young officially announced earlier this week that he would vie to take back his former congressional district in a rematch against Democrat Cindy Axne (pictured).

Axne unseated Young in the state’s 3rd CD last year and will (presumably) be joined by freshman Democrat Abby Finkenauer from the 1st CD defending their seats on the 2020 ballot in two key races for their party to hold the chamber for the 117th Congress. [Axne has decided not to challenge U.S. Senator Joni Ernst while Finkenauer has not yet made such a declaration].

Congresswoman Axne represents a slightly more vulnerable district for the party among the two first-term U.S. Representatives in the state.

But although freshman lawmakers are generally more vulnerable at the ballot box to retain their seats, it has been quite some time since a first-term member of the U.S. House from Iowa has been defeated in their quest for reelection.

In fact, it’s been more than half a century.

The 1966 cycle was the last time a freshman U.S. Representative from either party in Iowa lost their seat at the ballot box – in what was a disastrous cycle for Democrats in the state.

After picking off five GOP-held seats during the Democratic landslide of 1964, four of these five freshmen gave their seats right back to the GOP two years later – with two freshmen being vanquished by those they had just unseated:

Since the 1966 cycle, however, every freshman Democrat and Republican running for reelection to the U.S. House from Iowa has prevailed – notching a perfect record of 22-0.

The last first-term Republican to lose their seat was Earl Vincent in 1928 after losing his renomination bid to Charles Swanson.

Only one other GOPer lost their first reelection bid since 1900, although technically the lawmaker was not a freshman at the time. George Scott simultaneously won special and general elections on November 5, 1912, serving the last four months of the 63rd Congress and the entirety of the 64th. In November 1914, however, he was defeated by Democrat Thomas Steele.

With two freshmen up for reelection, Democrat Dave Lobsack’s retirement likely creating a competitive open 2nd CD, and Republican Steve King being heavily targeted by his own party in the 4th CD, the 2020 elections could produce significant turnover in Iowa’s congressional delegation.