Of the eight sitting governors to seek their party’s nomination since the early 1900s, Bevin’s 13.4-point win was the closest 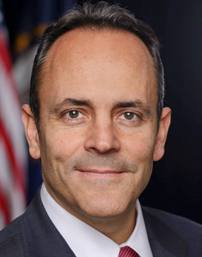 Although Kentucky Republican Matt Bevin entered Tuesday’s primary with the lowest gubernatorial approval rating in the country (33 percent, according to Morning Consult), his victory against state Representative Robert Goforth was still closer than many analysts (and polling data) suggested.

That marks the narrowest win by an incumbent in a Kentucky gubernatorial primary in state history.

Since the first state primary for the office in 1903, sitting Kentucky governors have landed on the primary ballot eight times (a smallish number due in large part to the fact that governors could not serve consecutive full terms until a little more than a quarter-century ago).

However, several lieutenant governors who became governor via succession after the resignation or death of an elected governor sought a subsequent full term and thus ran in their party’s primary.

Each of these incumbents enjoyed stronger wins than Bevin on Tuesday:

In 1903, Democrat J.C.W. Beckham ran unopposed in the first state primary for his party, winning election to a full term that November. Beckham initially became governor after the assassination of Governor William Goebel in 1900.

Two other Democratic governors ran unopposed to secure their renomination bids: Paul Patton in 1999 and Steve Beshear in 2011.

Aside from Bevin, the only sitting Republican Kentucky governor to seek a second consecutive term was Ernie Fletcher in 2007.

On the Democratic side Tuesday, state Attorney General Andy Beshear’s 6.0-point victory over state Representative Rocky Adkins goes down as the eighth closest gubernatorial primary for the party in Kentucky history:

The 27.9 percent won by former Auditor Adam Edelen behind Beshear and Adkins marks the second best showing for a third-place candidate from either party in a gubernatorial primary.