Gianforte is just the second sitting U.S. Representative from Montana to seek the governorship in state history 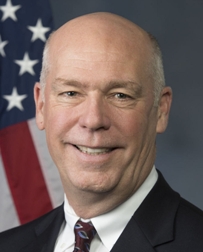 After a short stint in Congress, two-term Montana Republican U.S. Representative Greg Gianforte has decided to make a second run at the governorship, following his 3.9-point loss to Governor Steve Bullock in 2016.

The GOP field is slated to be a who’s who in Montana politics with Secretary of State Corey Stapleton, state Attorney General Tim Fox, state Senator Al Olszewski, and former state Senator Gary Perry already in the race.

Only one sitting U.S. Representative from the Treasure State has ever been elected governor – and Gianforte is just the second to even make such an attempt.

In 1936, Democrat Roy Ayers was a two-term congressman who defeated incumbent Governor William Holt in the July primary. [Holt, president of the state Senate, became governor after the death of Frank Cooney in 1935. Lieutenant Governor Cooney had succeeded Governor John Erickson who resigned his seat after an appointment to the U.S. Senate in 1933].

Ayers then defeated former Lieutenant Governor Frank Hazelbaker in the general election and would serve one term before losing his 1940 reelection bid.

Ayers actually lost three gubernatorial races during his political career, having already been defeated during the Democratic primaries of 1924 and 1928 by Erickson while serving as a judge of the tenth judicial district of Montana.

In 1944, former one-term Republican Jacob Thorkelson (1939-1941) was crushed in his party’s primary by Governor Sam Ford. Ford clobbered the physician and 1942 U.S. Senate candidate by 76.4 points.

Like Thorkelson, D’Ewart also cut his U.S. House tenure short with a failed U.S. Senate bid (in 1954) and then came up just 0.8 points shy of winning the GOP nomination for governor in 1960 to former state Senator Donald Nutter.

The last gubernatorial candidate to have previously served in the U.S. House was Republican Rick Hill.

Hill won the GOP nomination by 16.3 points over 2020 candidate Corey Stapleton but Bullock defeated him that November by 1.6 points.

It should be noted that a sitting U.S. Delegate from Montana did win the state’s inaugural gubernatorial election.

If Gianforte survives his party’s primary next year he will try to avoid being the first major party nominee to lose two consecutive gubernatorial elections in Montana since Frank Hazelbaker in 1932 and 1936.