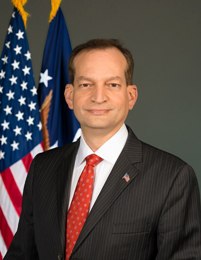 With Alex Acosta’s recent announcement that he would resign from his post on July 19th as U.S. Secretary of Labor, yet another Donald Trump cabinet secretary is out during the president’s first term.

[Note: A second non-acting department head has also exited from one of these aforementioned departments – Kirstjen Nielsen of Homeland Security].

Despite all of these resignations, however, Trump has not yet eclipsed two modern presidents on this metric.

The revolving door in Trump’s cabinet is in stark contrast to the stability seen during the first term of the last two presidents.

Barack Obama saw all but two initial department heads last through at least the end of his first term.

In other words, Trump had seven department heads leave office before the first such departure during President Obama’s first term.

Of the eight original department heads who have left during Trump’s administration, a few set records along the way.

Price served for 7 months, 20 days which marked the shortest tenure in HHS history (or its predecessor Health, Education, and Welfare).

Kelly lasted 6 months, 12 days – also the shortest tenure in the (brief) history of the Department of Homeland Security.