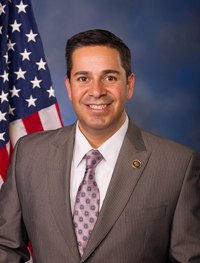 As is customarily the case each cycle, several sitting and former U.S. Representatives are lining up for a run at the nation’s upper legislative chamber in 2020.

More are expected to be added to that list, including current Wyoming at-large U.S. House member Liz Cheney.

There are currently 48 U.S. Senators who formerly served in the house – a high number historically, but the lowest since the Election of 1998 when there were 44 in the 106th Congress.

Rosen made history in 2018 when she unseated Dean Heller to become the first freshman woman in the U.S. House to be elected or appointed to a U.S. Senate seat.

There have been more than 600 U.S. Senators who previously served in the lower chamber, and, prior to Rosen, all 36 who were sitting freshmen at the time of their election or appointment were men.

A total of 20 of these 36 took their seats during the direct election era with three currently serving in the 116th Congress with Rosen: Republicans Tim Scott of South Carolina, Steve Daines of Montana, and Tom Cotton of Arkansas.

[Note: Washington Democrat Maria Cantwell had a six-year gap between her lone term in the house and her election to the senate in 2000].

Scott was appointed to his Senate seat one day before the end of his first term in January 2013 and had been reelected to a second term in the lower chamber two months prior.

Only five other freshmen have won a senate seat over the last 55 years:

The remaining sitting freshmen who won election to the U.S. Senate since the adoption of the 17th Amendment are:

Aside from Cantwell, only one other former one-term U.S. House member has won a senate seat over the last 65 years: Virginia Republican George Allen. Allen served just 14 months in the House from November 1991 to January 1993 and did not seek a second term, choosing instead to run for governor. He was elected to the U.S. Senate in 2000.

Just five others have done so since 1914: