Utah is one of three states never to elect a sitting or former U.S. Representative to the office of governor 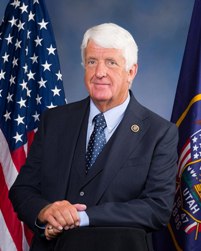 Rob Bishop’s announcement late last month that he would not seek a 10th term in the U.S. House next year was accompanied by speculation – not squashed by the 68-year old lawmaker – that he may be eying a gubernatorial bid instead.

Bishop would be the second sitting U.S. Representative to seek a governorship in the 2020 cycle – joining Montana Republican Greg Gianforte.

Utah’s 1st Congressional District lawmaker and former state house speaker has not faced a competitive legislative election across his long career that has spanned parts of five decades. [Bishop has won more than 60 percent of the vote in each of his nine terms].

That could change, of course, if he sought the governorship, with Lieutenant Governor Spencer Cox already in the race and former Governor Jon Huntsman inching closer to a bid by resigning as U.S. Ambassador to Russia on Tuesday.

If Bishop runs and wins he would make history in the Beehive State – no sitting or former member of the U.S. House has ever won the office of governor in Utah history.

Only two other states share this electoral history: Alaska and Arizona.

Ten additional states have never had a sitting U.S. Representative win a gubernatorial election, although ex-members have been successful. The most recent examples follow:

There have already been 17 sitting U.S. Representatives who won governorships this century including four during the 2018 cycle:

These aforementioned U.S. Representatives served an average of slightly more than four terms in the chamber prior to their gubernatorial wins and only one – Rep. Wise of West Virginia – was a fixture in the U.S. House as long as Bishop (nine terms). [Note: Nathan Deal of Georgia in 2010 and Rep. Abercrombie had served longer – 10 and 11 terms respectively – but technically were not sitting members of the U.S. House on Election Day, retiring some months prior].

Across history, there have been some freshmen U.S. Representatives who launched successful gubernatorial bids, such as North Dakota Democrat Arthur Link in 1972 and Indiana Republican Alvin Hovey in 1888.