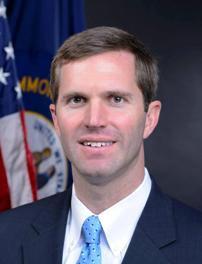 With all precincts reporting, Kentucky Attorney General Andy Beshear eked out a victory against GOP Governor Matt Bevin by less than 6,000 votes.

The unofficial results show Beshear placing first with a plurality of 49.2 percent ahead of Bevin at 48.8 percent and Libertarian John Hicks at 2.0 percent.

Beshear is the first candidate to win a gubernatorial election without majority support in the Bluegrass State in over a century. In 1915, Democratic U.S. Representative Augustus Stanley was elected with 49.1 percent against Republican attorney Edwin Morrow.

The 0.36-point margin in the 2019 gubernatorial contest goes down in the Kentucky history books as the second closest race out of the 58 direct elections for the office since statehood.

Only the aforementioned 1915 contest between Stanley and Morrow had a more narrow margin with Stanley winning by just 0.08 points.

Kentucky has had several other gubernatorial races go down to the wire over the last few centuries with five other elections decided by less than a percentage point: