Seven states have elected U.S. Senators into the majority party of the subsequent Congress 70+ percent of the time over the last century, but no state has done so in each of its last four elections

Just as the 2020 presidential election could end up being another nail-biter, partisan control of the U.S. Senate is also at stake and in doubt heading into the last eight-plus months until November 3rd.

Democrats, meanwhile, have only one seat in which they have an equal or greater chance to lose – that held by Alabama Democrat Doug Jones.

If all five of those seats flip, partisan control will tally 50-50 for the 117th Congress with the tiebreaker coming in the form of whoever wins the vice-presidency up the ballot.

But just as certain states have laid claim to the title of a presidential ‘bellwether’ over the years (e.g. Missouri, Nevada), so too have some states had a much richer history than others of voting for U.S. Senate nominees for the party that will control the chamber during the subsequent congress (although the correlations are a bit more modest).

And it just so happens that two of the aforementioned states with competitive races in 2020 rate as the nation’s most reliable historical U.S. Senate bellwethers.

A Smart Politics analysis of more than 1,900 U.S. Senate contests since the passage of the 17th Amendment in 1913 finds that the winning party of elections in North Carolina and Alabama have had the strongest correlation with which party controls the chamber in the next congress.

Seven states from all four regions of the country have elected Senators helping to form the majority party in the impending Congress at a 70 percent rate or higher: Rhode Island in the East, Nevada in the West, Missouri in the Midwest, and Alabama, North Carolina, Arkansas, and Georgia in the South.

North Carolina leads the way at 73.8 percent, electing a member to the majority caucus in 31 of 42 elections since 1914.

The Tar Heel State already boasts the strongest track record over the last 30 years for consistently hosting the most competitive U.S. Senate races.

North Carolina ranks first in the nation with an average margin of victory of just 6.1 points across the ten elections to the chamber it has hosted since 1990. In fact, 14 of the state’s last 15 U.S. Senate elections have been decided by single-digits since 1978.

Since the turn of the century, North Carolina voters have backed the nominee of the party controlling the U.S. Senate in the subsequent congress in six out of seven cycles. Republican Richard Burr’s reelection to a second term in 2010 while Democrats retained power in the 112th Congress is the lone red mark on the state’s bellwether resume during this period.

Only one other state can make such a claim: Alaska has voted U.S. Senate candidates into the majority party in five of six races since 2000 (all but Lisa Murkowski in 2010).

Several North Carolina Democrats have lined up for the chance to take on Senator Tillis in 2020, with state Senator Erica Smith and former state Senator Cal Cunningham running in a dead heat with the first-term Capitol Hill legislator.

While Alabama has not been as strong of a U.S. Senate bellwether this century (four of seven elections), the state ranks second overall since 1913 with its voters backing a nominee joining the majority caucus in 30 of 41 elections (73.2 percent).

A strong case could be made that Alabama will pad those stats in 2020: if Democrat Doug Jones is victorious it is quite likely his party will seize control of the chamber. If Republicans pick up Jones’ seat, Democrats would have to run the table in each of the four toss-up races mentioned above (plus win the presidency) – hardly an easy feat.

On the other end of the spectrum, seven states have elected U.S. Senators over the last century that have ended up in the subsequent Congress’ minority party more than half the time.

Vermont is the anti-bellwether, with its voters backing a candidate from the party controlling the next Congress just 34.1 percent of the time (14 of 41 elections). 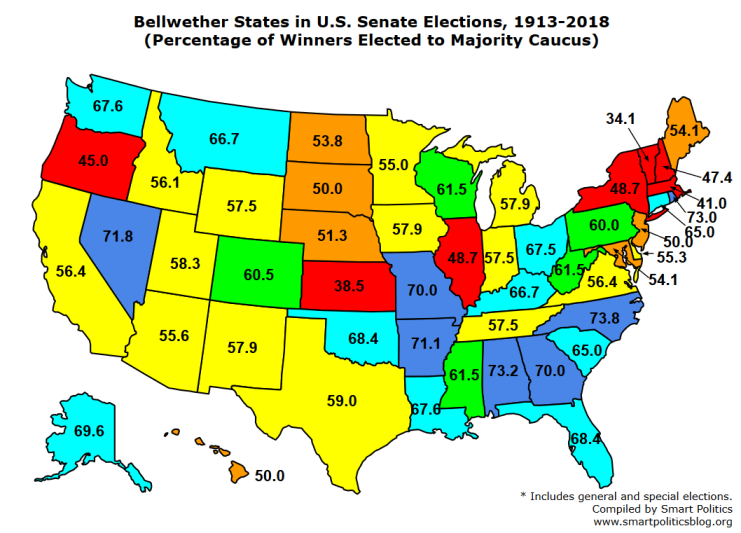 Overall, voters across the 50 states have elected nominees from the party controlling the subsequent congress 58.9 percent of the time (1,126 of 1,912 elections).

But no state has done so over its last four elections to the office. The current longest streak is three, held by seven states: Florida, Indiana, Mississippi, Missouri, North Dakota, Oklahoma, and South Carolina.