It’s been more than 85 years since a Minnesota U.S. Representative has drawn four primary challengers 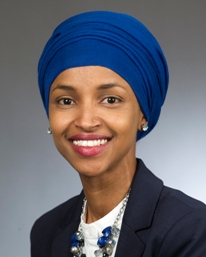 For a first-term U.S. Representative, DFLer Ilhan Omar of Minnesota’s 5th Congressional District seems to have received outsized attention and media coverage during her first 16+ months in office.

That coverage, in part a result of her public spats with President Donald Trump, has not only brought Omar’s campaign millions of dollars from across the nation this cycle, but it also appears to have rankled a near record number of constituents who want to pry the DFL nomination from the Minneapolis-based legislator.

While it remains to be seen if all four candidates will carry their campaign through the primary (or if any other candidate jumps into the race at the 11th hour), as it now stands Omar has inspired an unusual number of contenders in the DFL 5th CD race.

For starters, it has been more than 85 years since the last time an incumbent U.S. Representative from Minnesota faced four primary challengers.

In fact, there have only been five instances in which as many as three candidates squared off against an incumbent since the DFL merger in 1944:

In 2020, the 5th Congressional District is poised to host a primary with more than three challengers to a sitting Minnesota U.S. Representative for just the fourth time since primary elections began for the office in the state in 1902.

The circumstances surrounding the most recent example in 1934 were unique. In 1932, the state could not agree on a redistricting plan, so all nine U.S. Representatives were elected at-large that November.

New lines were drawn for the 1934 cycle, which resulted in two freshman Republicans squaring off in the Hennepin County-based 5th CD: former Governor Theodore Christianson and former Auditor Ray Chase.

Four other Republicans jumped into the race including former two-term U.S. Representative William Nolan, who lost his seat during the chaotic 1932 election (which had 32 candidates in the general election race for nine seats).

In the end, Christianson won out – defeating Chase by 16.3 points with 42.5 percent of the vote.

The all-time record for the largest number of primary challengers faced by a Minnesota U.S. Representative is five, set in 1926.

Since 1944, a total of 203 of 290 incumbents have run unopposed for their party’s nomination and just 26 have faced multiple opponents.

One reason it is so rare for multiple challengers to line up against a sitting Minnesota U.S. Representative is because incumbents rarely lose.

Incumbents have been victorious in 203 consecutive renomination bids for the office in Minnesota since 1964 and 289 of 290 attempts since the DFL merger in 1944.

The only incumbent to lose during this span was 12-term Republican H. Carl Andersen in 1962.

In that cycle, reapportionment caused Minnesota to lose a seat and redistricting prompted Andersen to run in a district in which he lost eight of the 19 counties he had represented and gained eight new ones.

No Democrat or DFL incumbent (or Farmer-Laborite) has lost a primary during this span.