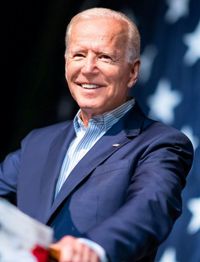 Joe Biden became the presumptive Democratic nominee on April 8th – a day after the Wisconsin primary when Senator Bernie Sanders dropped out of the race.

Since then, more than a half-dozen states have held their primaries – mostly via mail-in ballots.

The results of these elections have not received much attention due largely to COVID-19 crowding out most other news and because Biden’s nomination is now a formality with no other candidates remaining in the Democratic field.

But despite his inevitability status, Biden is not exactly sprinting to the finish.

In the seven primaries held since Wisconsin, Biden has received the support of three quarters of voters just twice – in Kansas on May 2nd (76.9 percent) and Nebraska on May 12th (76.9 percent). [Note: With the exception of Nebraska, election dates refer to the last day of mail-in voting].

Twice he has failed to win two-thirds of the vote: in Alaska on April 10th (55.3 percent) and in the most recent party-run primary in Hawaii on May 22nd (63.2 percent).

But the notable vote still coming in for Sanders is not simply a protest vote against the former Vice President.

Due to rule changes made this cycle, Sanders is still able to receive a substantial number of delegates. [In Sanders’ exit speech he specifically noted he would keep his name on the ballot for the remaining primaries to collect as many delegates as possible and leave a bigger footprint when the party platform is being created at the Democratic National Convention].

In sum, Sanders has been awarded just shy of one-fifth of the 300+ delegates up for grabs since he dropped out of the race.

Whether some primary voters are strategically backing Sanders for delegates or simply voting against Biden, it is not unusual for presumptive nominees to fall short of the 80 or even 70 percent mark in late-stage primaries conducted after all other challengers have exited the race.

Trump only reached the 80 percent mark  in one of the nine states holding primaries after Kasich’s exit (New Jersey, 80.4 percent, June 7th).

With more than a dozen states yet to hold their presidential primaries, Sanders will easily sail past the 1,000 delegate mark as Biden quietly loses at least a quarter of the vote in many of these contests.