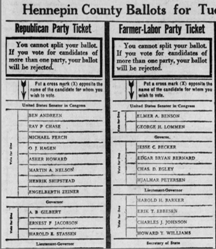 Hundreds of thousands of Minnesotans have been voting in the 2020 primary in recent weeks, but Tuesday is officially Primary Day.

This is the sixth consecutive midterm or presidential election cycle in which the statewide primary has been held on the second Tuesday in August dating back to 2010.

That change, prompted in part to ensure nominees would be chosen with enough time for general election ballots to be mailed to Minnesotans in the armed services across the globe, is one of many that have occurred over the past century in terms of when Primary Day is held on the calendar.

After the passage of a direct primary law in 1901, statewide primaries first launched in Minnesota during the 1902 cycle for the offices of U.S. Representative, state Senator, state Representative, and District Court Judge. [Primaries for additional local and county offices were also conducted].

The third Tuesday in September was designated as Primary Day and the inaugural (and controversial) primary was held on September 16, 1902. [Note: The biggest criticism in the early years of the Minnesota primary was a fear of partisan meddling].

After five cycles, partisan primaries were also added in September 1912 for the offices of U.S. Senator, Governor, Lieutenant Governor, Secretary of State, Treasurer, Attorney General, and Railroad and Warehouse Commissioner. [The offices of Auditor and Supreme Court Clerk were not on the ballot in 1912 and thus did not have primaries that cycle].

The first primaries were also held for state Supreme Court Associate and Chief Justices in 1912 – after returning to the nonpartisan status that has defined the office for all but an 18-year period since statehood (1892-1910).

Note: The 1912 primary was also notable for providing voters with both first and second choice columns so that, in the event no candidate received a majority of first place votes, the ‘ranked choice’ method would go into effect (eliminating the candidate with the lowest number of first choice votes and allocating any second choice votes on those ballots and then repeating until a single candidate received a majority).

In 1914, Primary Day switched to the third Tuesday in June with state legislative candidates designated as nonpartisan.

Primaries would be conducted on the third Tuesday in June for 13 cycles through the 1938 election before returning to the month of September in 1940 – this time on the second Tuesday of the month.

There had been multiple unsuccessful efforts to move the primary back to September from June over the previous decades motivated in part to shorten the campaign season.

The new primary date was part of an omnibus elections bill that Governor Harold Stassen signed into law on April 21, 1939. The bill also significantly shortened the filing period from January 1 to June 1 to a 50-day period beginning 90 days before the primary and ending 40 days prior.

The second stint of September primaries would prove to be short-lived, however, with the state moving the election to July after just two cycles in 1944.

The ‘Soldier Bill’ was signed into law by Governor Edward Thye after a special legislative session in March 1944 to move up the primary date to the summer so that Minnesotans in the armed services were able to participate in the general election.

For the first time primary day was designated for a Monday – the second Monday of July (July 10th that cycle).

The July primary would also last just two cycles before returning to the second Tuesday of September again on September 14, 1948. [A sunset provision of the Soldier Bill required the primary revert back to September unless new legislation was passed].

With the exception of the 1992 and 1998 cycles, when the primary election was held on the third Tuesday of the month (September 15th), Primary Day remained on the second Tuesday of September for 60 years through 2008.

It has been held on the second Tuesday in August ever since.

The results of nearly 8,500 primary elections across more than a dozen offices in the state dating back to 1902 can be found at the recently launched Minnesota Historical Election Archive, curated by Smart Politics.

Posted in Minnesota and tagged news