For the first time in history, a Democratic nominee for president received a larger percentage of the vote in Kansas than in the Show-Me State 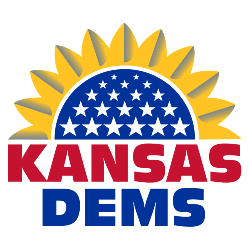 Reliably red Kansas has not shed its conservative credentials, although recent election cycles have shown cracks in the state’s GOP armor.

In 2018, Kansas Democrats flipped the governorship (Laura Kelly) and one congressional district (Sharice Davids in CD-03) and came within single digits of winning the election for secretary of state for the first time since 1986.

Meanwhile, this cycle Barbara Bollier turned in the most competitive performance by a Kansas Democratic U.S. Senate nominee in a quarter-century.

In neighboring Missouri, the last half-decade has not been as kind to Democrats.

The party lost control of the governorship and offices of secretary of state, attorney general, and treasurer in 2016 plus the state’s Class I U.S. Senate seat in 2018.

What is particularly noteworthy is how this diverging Democratic momentum between the two states manifested itself in the presidential race in 2020.

Donald Trump carried both Missouri and Kansas by comfortable margins, but, for the first time in U.S. history, a Democratic nominee received a larger percentage of the vote in Kansas than its neighbor to the East: Joe Biden won 41.56 percent of the vote in Kansas and 41.41 percent in Missouri.

During the previous 39 election cycles since Kansas statehood in 1861, the Democratic presidential nominee had consistently garnered a lower percentage of the vote than in the Show-Me State – and by an average of 12.5 points.

This Democratic milestone in Kansas has been a few decades in the making. In 1996, President Bill Clinton ran 11.5 points behind in Kansas (36.1 percent) compared to Missouri (47.5 percent), but that gap has closed in every subsequent cycle:

Biden’s 14.65-point loss in Kansas was closer than any presidential nominee from his party since Clinton in 1992 (-5.1 points).

The 2020 cycle was also the first time in more than 100 years, and just the third time in U.S. history, in which the Republican margin of victory in Kansas was smaller (or margin of loss was larger) than in Missouri. President Trump won Missouri by 15.4 points and Kansas by 14.7 points.

The last time Republican nominees were less competitive in Kansas than its neighbor was during the 1912 and 1916 cycles.

In 1916, Charles Hughes lost Kansas by 5.9 points while coming up 3.7 points short in Missouri.

Biden’s 41.6 percent tally in Kansas was just the 13th time in 40 cycles in which a Democratic presidential nominee reached the 40 percent mark in the state.

Democrats have reached that mark in 36 of these 40 cycles since 1864 in Missouri.