After years of journalistic projections, state population numbers were released on Monday from the 2020 U.S. Census and revealed that six states will gain seats in the U.S. House of Representatives come January 2023 (Texas gaining two and Colorado, Florida, Montana, North Carolina, and Oregon gaining one each) while seven states will lose one seat (California, Illinois, Michigan, New York, Ohio, Pennsylvania, and West Virginia).

The general geographic trends seen in recent decades continued with this apportionment – a reduction of seats located in the Midwest and Northeast and an increase in the South and West.

However it is the scale of change, or lack thereof, which is the real story.

For starters, the delegation size of just 13 states (26 percent) was affected by the new U.S. Census numbers.

That is the lowest percentage of states affected by reapportionment in history and the lowest raw number of states since the apportionments of 1800 and 1810 when 13 states also gained or lost seats (excluding new states).

One big difference of course, is the country had far fewer states in the early 19th Century. [Note: Following the 1790 Census, the U.S. House delegation changed in 12 of the 13 states – all but Delaware]. 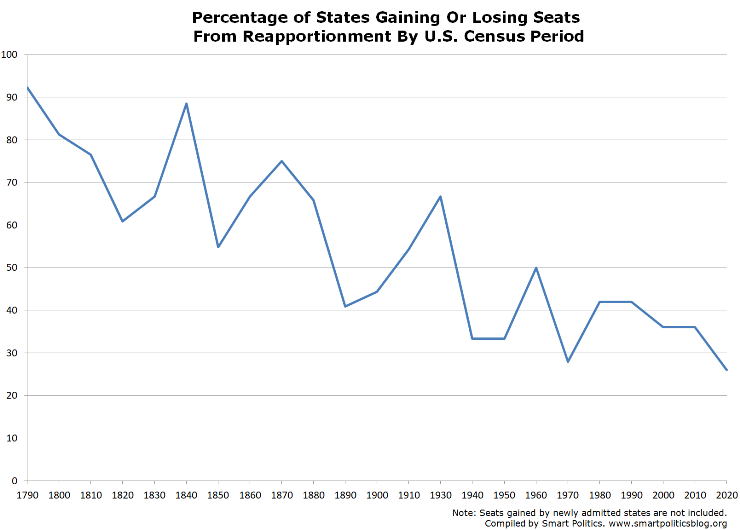 That is also the lowest raw number and percentage of seats to shift in U.S. history and far below the historical average of 34.5 seats. [Note: This data also excludes seats gained by newly admitted states].

Since the number of U.S. Representatives stabilized at 435 seats following the 1910 Census (with the exception of a very brief period of 437 seats after Alaska and Hawaii were granted statehood), an average of 29.6 seats were gained or lost following reapportionment, or 6.8 percent of the chamber.

That is more than double the number and percentage of seats that changed hands this cycle.

The largest number of seats ever gained and lost in a cycle was 57 following the 1840 Census. [Note: The total size of the chamber was reduced by 19 seats for the subsequent 28th Congress in 1843].

The next biggest change came after the 1930 Census at 54 seats (12.4 percent) – not so surprising since there had been a 20-year gap since the previous reapportionment. 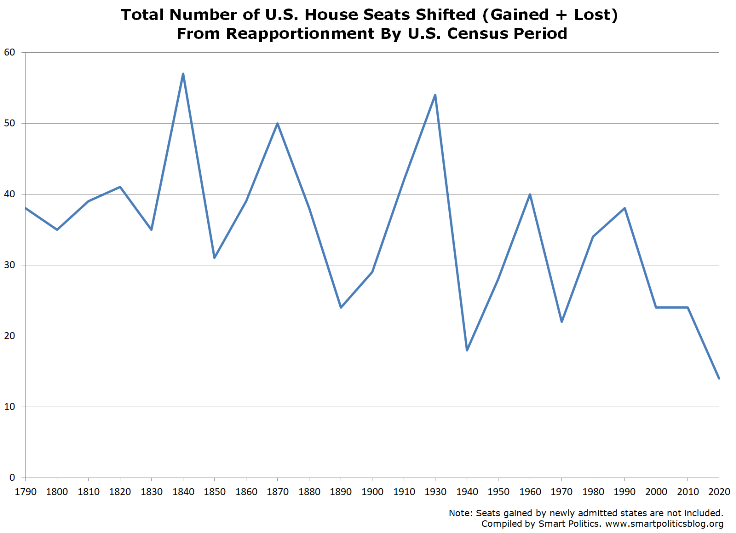