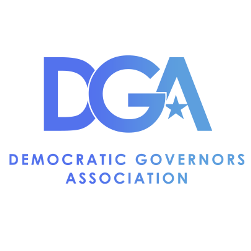 As the calendar inches closer to the 2022 midterms, Democrats are working to fend off expected losses across various offices.

The party will be defending several battleground states in elections for governor – many of these in states that have had a knack over the last three decades of not rewarding the party of the president.

Five states governed by Democrats have gubernatorial elections in the 2022 cycle in which voters have not elected a nominee from the same party as the sitting president for more than a quarter-century.

Kansas (since 1990), New Mexico (1990), and Wisconsin (1994) have elected nominees for governor from a different party than the president for eight consecutive cycles while Maine (1994) and Michigan (1994) have done so for each of the last seven.

A sixth naysayer state, New Jersey, holds its election for governor this November. The Garden State has also not elected a governor from the same party of the sitting president for eight straight cycles dating back to 1989. [The last to do so was incumbent Tom Kean who won a second term with a 40-point blowout in 1985 one year after Ronald Reagan was reelected].

Only three other states currently have naysayer streaks of two or more cycles: Nevada with three (2010) and Illinois (2014) and Kentucky (2015) with two.

Incumbents have filed (or are expected to file) for reelection in each of the five aforementioned states: Laura Kelly in Kansas, Janet Mills in Maine, Gretchen Whitmer in Michigan, Michelle Lujan Grisham in New Mexico, and Tony Evers in Wisconsin. [Mills and Whitmer have not formally declared their 2022 intentions].

Looking more specifically at the history of Democratic nominees trying to win governorships with a Democrat in the White House, there have been some particularly prolonged droughts.

Not surprisingly, Democratic electoral futility often begins and ends in South Dakota, where the party has lost a nation-leading (along with Utah) 11 consecutive contests for the office. Democratic nominees have currently lost 18 elections in a row with their party controlling the presidency dating back to 1936. [Governor Tom Berry won reelection in 1934 with FDR in office].

The Democratic Party has similarly endured notable droughts in three other Midwestern states:

By contrast, Hawaii Democratic gubernatorial nominees have a perfect record during Democratic presidential administrations – seven for seven – with the party winning at least three-quarters of the time since 1953 in three other states: North Carolina (six of seven, 85.7 percent), New Hampshire (11 of 14, 78.6 percent), and West Virginia (six of eight, 75.0 percent).

Looking at gubernatorial results across both Democratic and Republican administrations since Dwight Eisenhower, New Hampshire by far leads the way electing governors from the party of the sitting president, doing so in 28 of 34 cycles since 1953 (82.4 percent). 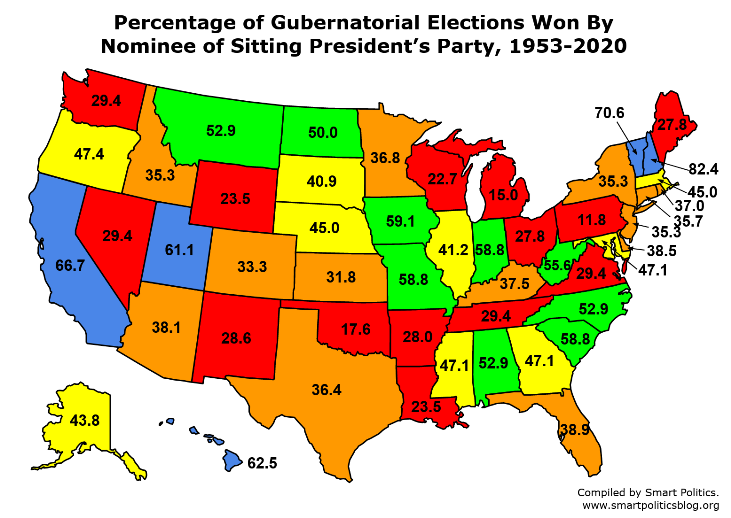 Pennsylvania has left the biggest naysayer footprint during this period voting for gubernatorial nominees of the president’s party in just two of 17 races (11.8 percent) followed by Michigan (15.0 percent, three of 20), Oklahoma (17.6 percent, three of 17), Wisconsin (22.7 percent, five of 22), and Louisiana and Wyoming (23.5 percent, four of 17 for each).