Republicans have been coming out of the woodwork in Wyoming to challenge party-bucking three-term U.S. Representative Liz Cheney in what is expected to be a barnburner of a GOP primary next year.

While there are a few women challenging the outspoken Trump critic (former Pavillion Mayor Marissa Selvig and businesswoman Robyn Belinskey), should Cheney lose the nomination for this safe Republican seat the state’s 14-cycle streak of electing a woman to the at-large seat is in jeopardy. A half-dozen men have already declared or filed paperwork including two state lawmakers.

That streak has propelled Wyoming – by leaps and bounds – to the top of the list of states with the highest percentage of electing women to the U.S. House in recent decades.

Smart Politics reviewed the 7,098 general and special U.S. House elections held since 1989, and calculated the rate at which women have been elected to these seats in each state.

Wyoming is the only state in which women have won a majority of such elections during this 30+ year period: 14 of 17 races (82.4 percent).

This streak only came close to ending in 2006 when Cubin defeated Democratic businessman Gary Trauner by 0.5 points and in 2008 when Trauner lost the open seat to Lummis by 9.8 points.

Just 10 states, including Wyoming, have elected women to the U.S. House in one-quarter or more U.S. House elections held since 1989.

It should be pointed out that eight of these 10 states have small delegations with all but California and Washington sending no more than four U.S. Representatives to D.C.

With six states in the Top 10, the 13-state Western region by far has elected women at a higher rate than the rest of the country over the last three-plus decades.

Alaska, Montana, Nebraska, North Dakota, Rhode Island, and Vermont have also not elected a woman to the chamber during this period. 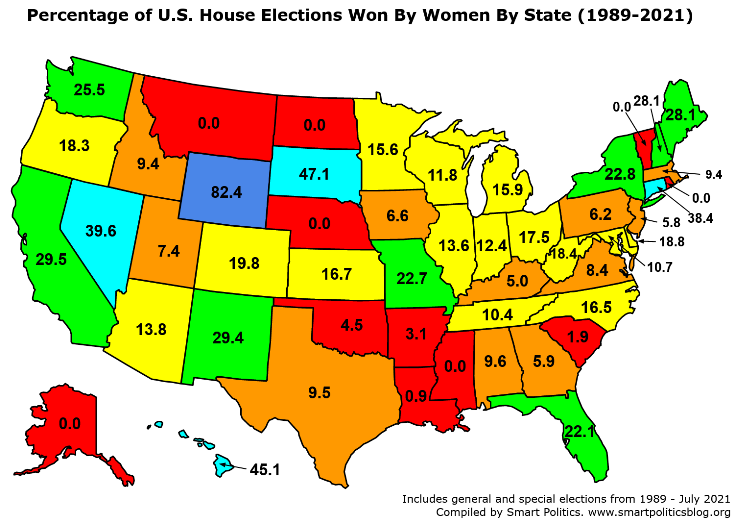 During the 105 years following the election of the first woman to the U.S. House in 1916, Alaska, Mississippi, North Dakota, and Vermont are the only states failing to do so even once.