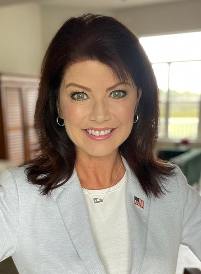 On Thursday, former Wisconsin Lieutenant Governor Rebecca Kleefisch made it official, launching her campaign to be the Republican nominee in the state’s 2022 gubernatorial election.

Kleefisch served eight years under Governor Scott Walker before their ticket was narrowly defeated by Tony Evers and Mandela Barnes in 2018.

And now, in what is currently a thin GOP field, Kleefisch is the decided front runner to take on Evers at the top of the ticket next year.

Wisconsin Republicans are hoping for a midterm cycle bounce – not an unreasonable expectation considering the poor record Wisconsin gubernatorial nominees of the party of the sitting president have endured over the last 90 years: winning just five of 33 elections since 1932.

But the track record of Wisconsin lieutenant governors ascending to the state’s top office – barring those who did so after the death or resignation of the governor – has been quite rare over the decades.

Over the last 170+ years since statehood, just three former or sitting lieutenant governors first earned their gubernatorial stripes via the ballot box.

Seven lieutenant governors succeeded their predecessors following the governor’s departure before the end of the term:

Three incumbents who became governor via succession did win another term: Davidson in 1906 and 1908, Goodland in 1946, and Rennebohm in 1948.

In addition to the failed gubernatorial bids by Salomon, Schrieber, and McCallum, four other lieutenant governors also fell short of the mark: