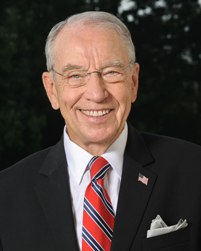 All signs point to Iowa U.S. Senator Chuck Grassley running for an eighth term next year which would likely take a GOP-held seat off the table for Democrats who are looking to maintain or bolster their slimmest-of-slim margins controlling the nation’s upper legislative chamber.

Grassley – who has never faced a primary opponent as an incumbent senator – will first have to dispense with state Senator Jim Carlin next June.

The long-serving legislator has never won less than 60 percent of the general election vote as an incumbent.

Additionally, should Grassley keep this seat in his party’s hands, it will mark just the second time in the direct election era that Iowa Republicans have won at least five consecutive U.S. Senate elections.

Since the state’s first direct election for the office in 1914, the GOP has won 25 of 39 U.S. Senate elections in Iowa.

The only period during which Republicans rattled off five or more straight wins was more than a half-century ago, from 1950 through 1966, with four of these being single-digit affairs:

Since then, and prior to the current streak, Iowa Republicans won back-to-back races just once: in 1978 (Roger Jepsen) and 1980 (Grassley).

It appeared that Republicans had won a fifth consecutive race in 1924’s general election with Senator Brookhart edging Democratic attorney Daniel Steck. But Steck successfully contested the election – even with a GOP majority ruling the chamber – and was seated about a year after the start of the 69th Congress.

From the mid-1850s through the pre-direct election era, Republicans swept every U.S. Senate contest in the state.