Over the last 50 years, governors have been knocked out of office in three straight elections in just four states 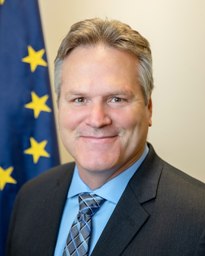 For every midterm election cycle going back more than a century to 1914, at least two governors have failed in their bid for another term, averaging 6.6 governors during this 27-cycle span.

That streak should easily be extended in 2022 with several incumbents involved in ‘toss-up’ races.

But there are two governors seeking reelection who – although they are favored to win another four years in office – have nonetheless seen each of their last two predecessors fall short of that goal.

This November, Alaska and Illinois could join a fairly small list of states which have had gubernatorial incumbents lose in three consecutive election cycles over the last half-century.

The last two cycles in Alaska have seen Republican Sean Parnell fall to independent Bill Walker in 2014 and Walker in turn lose to current GOP governor Mike Dunleavy (pictured above) dropping out of the race a fortnight before Election Day.

Dunleavy is not only facing a rematch with Walker in the state’s new top-four primary system this November, but also Republican challengers from his right such as state Representative Christopher Kurka.

Pritzker has a fairly clear path to the nomination and will await the winner of a crowded GOP primary field.

During the last half-century, governors have been defeated in three consecutive cycles just four times including only once during the last 30 years:

Three other states have seen governors lose their bids for another term in three straight cycles overlapping part of the last half-century:

Over the last 100+ years since 1914, there have been 21 instances of primary or general election voters knocking their gubernatorial incumbents out of office in at least three straight cycles.

The record during this span was set in Michigan with governors losing in six straight cycles: Republican Wilbur Brucker in 1932, Democrat William Comstock in 1934 (primary), Republican Frank Fitzgerald in 1936, Democrat Frank Murphy in 1938, Republican Luren Dickinson in 1940, and Democrat Murray Van Wagoner in 1942.