All five previous winners of Minnesota U.S. House special elections were successful in their reelection bids 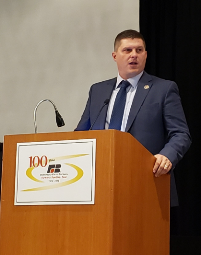 With both candidates simultaneously winning nomination for the November 8th general election that day, Finstad will head into the rematch as the greenest U.S. House incumbent in Minnesota history.

Congressman Finstad will have been on the job just 91 days when voters head to the polls (and less than that for those voting early).

[Note: Finstad was technically sworn in 88 days prior to Election Day on August 12th, but his term of service is listed as beginning on the day of his special election victory three days prior].

Minnesota has only held six special elections for the U.S. House since statehood – and none with a vacancy more than 42 days prior to the 173-day vacancy of the 1st CD after Republican Jim Hagedorn’s passing in mid-February of this year.

Every other Minnesota U.S. Representative prior to Finstad had at least eight months on the job before standing for reelection in the subsequent general election:

Keller was reelected as a Republican in 1920.

It should be noted that one other Minnesota U.S. House member served less than 600 days in office when he came up for a second term.

James Cavanaugh was one of two Democrats elected at-large during Minnesota’s initial election prior to statehood on October 13, 1857.

Cavanaugh was not seated until Minnesota statehood, however, on May 11, 1858 and was up for reelection on October 11, 1859 – some 518 days later (1 year, 5 months). [Minnesota’s other initial U.S. Representative, William Phelps, did not seek reelection that cycle]. Cavanaugh placed third in the top-two election dominated by Republicans in Minnesota that cycle.