As unemployment rises month-by-month in Minneapolis, along with the rest of the Gopher State, serious violent and property crimes continue to fall in Minnesota’s most populated city at an impressive rate.

The figure below shows that crime rates tend to rise during the spring and summer, and drop during the late fall and winter. 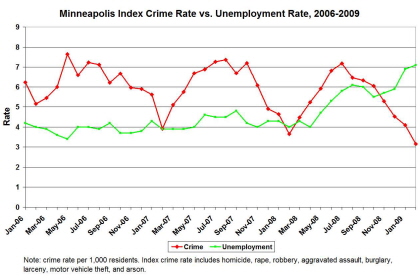 However, even when the Minneapolis unemployment rate began to rise in May 2008, the city’s crime rate arc basically held its traditional shape, even falling a little.

This trend has been even more pronounced over the past five months:

· The January 2009 unemployment rate was 60.5 percent higher than in January 2008, while the crime rate dropped 11.9 percent from the year prior.

If these trends hold come next fall, Minneapolis Mayor R. T. Rybak, who has run on a crime-fighting platform, has some impressive data to cite during his campaign, even while presiding over an economic crisis.