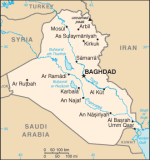 The death of a Coon Rapids, Minnesota Army Major in Basra, Iraq on Tuesday, Tad T. Hervas, now brings the number of Gopher State fatalities in Operation Iraqi Freedom to 66 since the war began in 2003.

While U.S. and coalition fatalities are on pace to be the lowest in the seven years of the Iraqi conflict, more than 100 U.S. military personnel have died in Iraq in 2009 including six from Minnesota.

Minnesotans have endured the fifth highest number of Iraq war fatalities in the country in 2009, behind only California (12), Ohio (9), Texas (8), and North Carolina (7).

Massachusetts has also had six military personnel from its state die in Iraq this year.

These dozen Midwestern states have experienced a fatality rate in Iraq of 15.01 deaths per 1 million residents, according to a Smart Politics analysis of 2008 U.S. Census Bureau population data and Iraq war fatalities compiled by iCasualties.org. That rate is higher than the South (14.72), the West (13.91) and the Northeast (11.73).

U.S. Per Capita Deaths and Casualties in Operation Iraqi Freedom by Region

The Midwest region also has the highest casualty rate from the Iraq war – those military personnel who are wounded or killed. At 125.8 casualties per million residents, its casualty rate is higher than that of the West (119.7), the South (119.4), and particularly the Northeast (95.8).

U.S. Per Capita Fatalities in Operation Iraqi Freedom by State