More than twice as many Republican U.S. House members from Minnesota have had military service than DFLers since merger in 1944 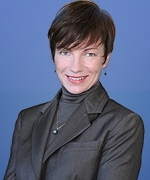 Dr. Maureen Hackett, a forensic psychiatrist who served three years overseas as a psychiatrist in the United States Air Force, announced her candidacy on Tuesday for the DFL nomination to challenge Republican Erik Paulsen in the state’s 3rd Congressional District in 2010.

Dr. Hackett was a Major in the U.S. Air Force from 1991-1994, where, according to her CV, her duties included “Treating active duty and their family and also completing evaluations directed by commanders in the field to answer questions regarding the ability of military personnel to perform their duties.”

If Hackett should win the nomination next year, she would be the second consecutive DFL nominee with military experience to try to capture the Gopher State’s 3rd District seat.

Last year, Iraq War veteran Ashwin Madia fell 7.6 points shy of victory in what many Democrats hoped would be a repeat of DFLer Tim Walz’s 2006 victory over six-term Representative Gil Gutknecht in the 1st CD. (Walz had served in the Nebraska and Minnesota National Guards from 1981 through 2005).

Will Dr. Hackett’s military service play a key role in her attempt to win back the 3rd Congressional District for the DFL for the first time in more than 50 years? (DFLer Roy Wier last won the 3rd CD back in 1958).

A Smart Politics analysis of the 48 Minnesotans elected to the U.S. House since the DFL merger in 1944 finds 35 percent (17) have served in the military, according to biographical information culled from the Biographical Directory of the United States Congress.

And of the 19 men and women from Minnesota who have been elected to the House of Representatives since 1982 only 4 have had such service: Jim Ramstad (in the Army Reserve), Collin Peterson (in the Army National Guard), John Kline (in the U.S. Marine Corps), and Tim Walz (in the Nebraska and Minnesota National Guards).

The Republican Party, particularly since the Reagan administration, is generally viewed by the American public as the party most supportive of a strong military and national defense. The Democratic Party has made a concerted effort since 2006 to recruit U.S. House candidates with military experience, with the nation currently involved in two wars overseas.

In Minnesota, Republican members of the U.S. House delegation have been much more likely to have served in the military than their DFL counterparts.

Since the DFL merger, more than twice as many Republican officeholders have served in the military (12) than DFLers (5). Overall, 46.2 percent of Republicans (12 of 26) elected to the U.S. House during that span have had military service compared to just 22.7 percent of DFLers (5 of 22).

If Dr. Hackett should win the DFL nomination and eventually upset the extremely well-funded Paulsen, she would be the fourth female to win such a post from Minnesota and the first with military experience.

Military Service for Minnesotans Elected to the U.S. House Since the DFL Merger, 1944-2008

Source: Biographical Directory of the United States Congress, Office of the Clerk, U.S. House of Representatives.