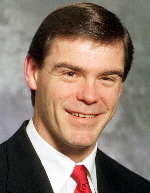 The arrest of a state representative for DUI less than 45 days before Election Day might be the sort of curve ball that could derail even a popular six-term incumbent.

But Minnesota State Representative Mark Buesgens (R-Jordan), who was arrested last Saturday for suspicion of driving under the influence of alcohol, and charged with three misdemeanors on Tuesday, does not represent any ordinary district.

Buesgens’ 35B House District is one of the most Republican districts in the Gopher State and thus remains unlikely to flip to the DFL – presuming there is no other shoe to drop…and presuming that no write-in candidacy from the GOP is launched in the coming days.

That qualifier is made because HD 35B was one of only six districts which had a Republican primary in 2010, and Buesgens was the only Republican incumbent in the House to face an intra-party challenger.

Buesgens was also one of only two Republican incumbents to face a primary challenger in 2006.

In both of those cycles, along with 2008, Buesgens’ primary opponent was former three-term GOP Representative Tom Rees.

Buesgens’ recent arrest might well have put his reelection chances against DFLer Jannaya LaFrance in doubt, even in a GOP wave election year, were his district not already so heavily tilted to the Republican Party.

Buesgens’ performance over the past decade in HD 35 is rather noteworthy.

Republicans have won only two other districts by at least 23.7 points in every election cycle since 2002: HD 32A (currently represented by Joyce Peppin, from Rogers) and HD 34A (Paul Kohls, from Victoria).

The overwhelming Republican tilt in HD 35B can also be seen in top of the ticket races:

Overall, HD 35B has averaged a 28-point GOP tilt in top of the ticket races since redistricting in 2002.