Ronald Reagan talked about bayonets more than twice as frequently as any other president; most presidential rhetoric casts the weapon as a symbol for tyranny and unjust force

The most buzzworthy moment of Monday night’s presidential debate at Lynn University (i.e. the “women in binders” of the Hofstra debate or the “Big Bird” of Denver) was Barack Obama’s lecturing of Mitt Romney on how certain military expenditures and weaponry become outdated with technology and thus are not an appropriate measure of how dollars are spent to keep this nation safe:

“But I think Governor Romney maybe hasn’t spent enough time looking at how our military works. You mentioned the Navy, for example, and that we have fewer ships than we did in 1916. Well, Governor, we also have fewer horses and bayonets, because the nature of our military’s changed. We have these things called aircraft carriers, where planes land on them. We have these ships that go underwater, nuclear submarines.” – Barack Obama, October 22, 2012

The bayonet reference has by far received the most mileage coming out of Florida now 24+ hours after the debate.

While this was the first time Obama has ever publicly mentioned the bayonet during his administration, many presidents before him have, like Obama on Monday, wielded it as a symbol to make a larger political point.

A Smart Politics review of presidential speeches and written statements finds that 19 presidents have referenced bayonets while in office with Ronald Reagan doing so 26 times – more than twice the amount of the any other president.

Overall, bayonets have been mentioned 74 times across 64 speeches and statements with Reagan leading the way with 26 such references.

George H.W. Bush is second with 10 references followed by Lyndon Johnson with eight, Dwight Eisenhower with six, Harry Truman with four, and Abraham Lincoln and George W. Bush with three.

Overall, Republican presidents have mentioned the bayonet 55 times compared to just 17 times by Democrats and two for other parties.

Number of Presidential References to Bayonets

Of course, when some presidents have spoken of bayonets, they have done so quite literally, without any hidden meaning or symbolism.

For example, Thomas Jefferson is the first to mention bayonets when he wrote to Congress:

“I now lay before you–
1. A return of ordnance, arms, and military stores the property of the United States.
2. Returns of muskets and bayonets fabricated at the armories of the United States at Springfield and Harpers Ferry, and of the expenditures at those places; and
3. An estimate of expenditures which may be necessary for fortifications and barracks for the present year.” – Thomas Jefferson, February 2, 1802

And, on occasion, the use of the bayonet was celebrated, particularly when recounting the heroic exploits of the U.S. military:

“After the assault platoon moved up, occupied the position and a base of fire was established, he led a bayonet attack which reduced the objective and killed approximately twenty-seven hostile soldiers.” – Dwight Eisenhower, Citation Accompanying Medal of Honor Presented to Benjamin F. Wilson, April 10, 1954

“At this point he was attacked by a North Vietnamese officer whom he fatally wounded with his bayonet.” – Richard Nixon, Remarks on Presenting the Medal of Honor to Three Members of the United States Army, March 7, 1969

“Faced with superior numbers, Captain Millett repelled Communist forces by leading the first bayonet charge by a U.S. Army company since World War I. For his valor, he was awarded the Congressional Medal of Honor.” – George W. Bush, Remarks to United States Troops at Osan, South Korea, November 19, 2005

But, the notion of a bayonet as an antiquated form of combat weaponry (as intimated by Obama in the debate) resonates in presidential rhetoric, such as in this speech on the Korean conflict by Bill Clinton:

“In many ways, it wasn’t a modern war at all. Oh, there were jets and helicopters, but most of the fighting was done with rifles, machine guns, bayonets, and mortars. Soldiers lived in sandbagged bunkers and stood watch on lonely ridges. It has been said that the Americans who fought in France in 1917 would have understood Korea, that the men who served under Lee and Grant would have recognized Korea.” – Bill Clinton, Remarks on the Observance of the 50th Anniversary of the Korean War, June 25, 2000

Beyond these literal references, the bayonet has much more frequently been spoken of by presidents with derision, as a symbol of oppression, bullying, and savagery or the inappropriate use of brute force by government:

“During this period, whilst other nations were extorting from her payment of their claims at the point of the bayonet, the United States intermitted their demand for justice out of respect to the oppressed condition of a gallant people to whom they felt under obligations for fraternal assistance in their own days of suffering and peril.” – Andrew Jackson, Seventh Annual Message, December 7, 1835

“If you succeed by the bayonet, you succeed against your own fellow-citizens and by the shedding of kindred blood, whereas by taking the opposite course you will have shown a paternal care for the lives of your people.” – John Tyler, May 12, 1842

“This shrewd, this unscrupulous, this evil propaganda attack–we cannot overcome with military weapons. You cannot transfix a tie with a bayonet, or blast deceit with machine-gun fire. The only weapons against such enemies are truth and fair dealing.” – Harry Truman, Address at the Ceremonies Commemorating the 175th Anniversary of the Declaration of Independence, July 4, 1951

“Now, you do get into differences of the methods and means by which the safety of these things will be brought about. For example, one extremist believes that merely in the fear of retaliation is safety. I doubt that many believe in that extreme view. Others believe you have just got to put the man on the spot with his bayonet fixed, almost, defending him. I doubt that for the United States many believe that is a sound policy.” – Dwight Eisenhower, The President’s News Conference, May 14, 1953

Presidents thus usually advocated a U.S. policy that divorced itself from the blade of the bayonet and instead advocated relations and engagement (at home and abroad) through less brutal means:

“The diplomacy of the United States has always been a sentimental diplomacy. We do not push our trade by the bayonet, by aggression, by the subjugation of helpless people.” – Benjamin Harrison, Address at the Dedication Ceremony for the Soldiers’ and Sailors’ Monument in Rochester, New York, May 30, 1892

“We want our relationship with other nations based not on a meeting of bayonets, but on a meeting of minds.” – Calvin Coolidge, Address at the Memorial Exercises Arlington National Cemetery, Arlington, Virginia, May 30, 1927

“But so far as my country is concerned, don’t be misled as the Kaiser was or as Hitler was, by a few irrelevant speeches. We don’t fight with bayonets or swords. We don’t even throw Molotov cocktails at each other in America.” – Lyndon Johnson, Remarks at a Reception at Government House, Melbourne, Australia, October 21, 1966

“There has never been a transfer of power by bayonet in America and, God willing, there never will be.” – Ronald Reagan, Remarks at the Inaugural Band Concert at the Capital Centre in Landover, Maryland, January 21, 1985

Presidents likewise cautioned other nations to drop their bayonets and cease using force for political (or geopolitical) gain:

“It is pledged in advance to the declaration that all the effort in the world can not suffice to maintain peace in Cuba by the bayonet.” – William McKinley, First Annual Message, December 6, 1897

“We can no longer permit any nation, or group of nations, to attempt to settle their arguments with bombs and bayonets.” – Harry Truman, Address to the United Nations Conference in San Francisco, April 25, 1945

“The people of South Vietnam will be given the chance to work out their own destiny in their own way, and not at the point of a bayonet or with a gun at their temple.” – Lyndon Johnson, “Two Threats to World Peace” – Remarks in Omaha on the Occasion of the Sending of the Five-Millionth Ton of Grain to India, June 30, 1966

The bayonet – as a symbol of oppression – is sometimes juxtaposed in presidential rhetoric with the ballot – the symbol of democracy and freedom.

“Last year we held an American election, in which the people–Democrats, Republicans, Independents, and others–by secret ballot, and without prodding by the bayonets of storm troopers, voted for their public officers–local, State and national.” – Franklin Roosevelt, Radio Address from the U.S.S. Potomac for Jackson Day Dinners, March 29, 1941

“It is ventured to affirm this even of Virginia and Tennessee; for the result of an election held in military camps, where the bayonets are all on one side of the question voted upon, can scarcely be considered as demonstrating popular sentiment. At such an election all that large class who are at once for the Union and against coercion would be coerced to vote against the Union.” – Abraham Lincoln, Special Session Message, July 4, 1861

“I mean, clearly, Iraq is a struggling democracy. But one thing is for certain: The people have made their mind about what they want. They want democracy: 8.5 million Iraqis went to the polls, see, and they’ve got a constitution that’s been written. It wasn’t written under bayonet or under the barrel of a gun.” – George W. Bush, The President’s News Conference With President Vladimir Putin of Russia, September 16, 2005

On multiple occasions George H.W. Bush used “bayonets and barbed wire” as a symbol for the tyrannical hold of communist governments behind the Iron Curtain: 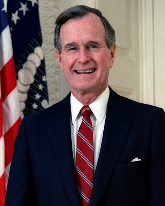 “And yet, who could predict that in 1989 freedom’s tide would also be economic, political, and intellectual? Or that the walls of bayonets and barbed wire, the walls of tyranny, would come tumbling down?” – George H.W. Bush, Remarks at the Annual Convention of the National Religious Broadcasters, January 29, 1990

In fact, Bush even assigns a moral inferiority to bayonets as an explanation for their ultimate failure as a means to govern a nation:

“Over the past 3 1/2 years, bayonets have been no match for the righteousness of God.” – George H.W. Bush, Remarks at the National Affairs Briefing in Dallas, Texas, August 22, 1992

But it was Ronald Reagan who was particularly fond of the bayonet symbol, but unlike many presidents, he spoke of the righteousness of the American use of the weapon:

“But I also believe that the Federal Government has an obligation to enforce the constitutional rights of even the least individual among us, wherever he may be, if those rights are being denied, and to do so at the point of bayonet if necessary.” – Ronald Reagan, The President’s News Conference, January 19, 1982

“The rights of all our citizens are sacred–in the eyes of God and under the Constitution of the United States. It’s the Federal Government’s responsibility to protect those rights for each and every citizen wherever that citizen may be, at the point of bayonet if necessary.” – Ronald Reagan, Remarks in New York City on Receiving the Charles Evans Hughes Gold Medal of the National Conference of Christians and Jews, March 23, 1982

That said, Reagan also echoed many of the sentiments of his predecessors regarding the fallibility of the bayonet with one of the most memorable quotes on the subject:

“Regimes planted by bayonets do not take root.” – Ronald Reagan, Address to Members of the British Parliament, June 8, 1982

But do political campaigns planted by symbolic bayonets take root?

We’ll find out in two weeks.