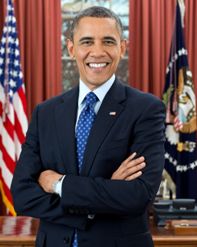 However, the president really riled up his political opponents (and some members of his own party) less than a week later when he spoke to a crowd in Cincinnati about Democratic members of Congress who did not give his address the kind of positive response (e.g. applause and ovations) as his fellow Republicans:

“They were like death and un-American. Un-American. Somebody said, ‘treasonous.’ I mean, Yeah, I guess why not? Can we call that treason? Why not? I mean they certainly didn’t seem to love our country that much.”

Trump is hardly the first president to mention ‘treason’ during his time in office – although the context was uniquely his.

In fact, it took Barack Obama more than seven years in the Oval Office before he first spoke that word.

On a trip to Texas in March 2016 during his last year in office, Obama expressed concern about how political opponents were using that word against his party:

“What’s happening in this primary is just a distillation of what’s been happening inside their party for more than a decade. I mean, this—the reason that many of their voters are responding is because this is what’s been fed through the messages they’ve been sending for a long time: that you just make flat assertions that don’t comport with the facts; that you just deny the evidence of science; that compromise is a betrayal; that the other side isn’t simply wrong, or we just—we disagree, we want to take a different approach, but the other side is destroying the country or treasonous. I mean, that’s—look it up. That’s what they’ve been saying.”  – Remarks at a Democratic National Committee Reception in Austin, Texas (March 11, 2016)

The president continued to speak on this theme on the following day:

“And we shouldn’t be surprised then when, in the heat of political season, it starts getting carried away. But we’ve got to say no to that. We can have political debates without turning on one another. We can have political debates without thinking that the people who disagree with us are all motivated by malice. We can support candidates without treating their opponents as unpatriotic or treasonous or somehow deliberately trying to weaken America. That’s not just one candidate who’s been saying that; some of the so-called more responsible candidates, including a gentleman from this State.” – Remarks at a Democratic Hope Fund Reception in Dallas, Texas (March 12, 2016)

Prior to Obama, some presidents used the word to talk about individuals who had committed actual treason, such as Bill Clinton addressing former CIA officer Aldridge Ames who was convicted of committing espionage for the KGB:

“But Aldridge Ames was a terrible exception to a proud tradition of service, a tradition that is reflected in the 59 stars that shine on the CIA’s memorial wall in honor of those who gave their lives to serve our country. So we owe it to all of you in the intelligence community and to the American people to make sure we act on the lessons of his treason but also to remind the American people that the people who work for the Central Intelligence Agency are patriotic Americans who have made a decision that they are going to devote their careers to keeping this country safe and strong.” – Remarks at the Central Intelligence Agency in Langley, Virginia (July 14, 1995)

While other presidents spoke of their support of the death penalty for the crime such as Ronald Reagan:

“Currently, there are no adequate Federal procedures on the death penalty, and so it cannot be used in cases where Federal statutes provide for capital punishment. My proposal would establish such adequate procedures so that the death penalty provisions already on the books can be utilized in such cases as espionage, treason, and aggravated murder.” – Remarks at a White House Briefing on Proposed Criminal Justice Reform Legislation (October 16, 1987)

“The time has come for society to act in its own self-defense. As a first important step, I strongly favor the use of the death penalty in the Federal criminal system in accordance with proper constitutional standards. The death penalty, in certain circumstances, should be imposed upon the conviction of sabotage, murder, espionage, and treason, and I think most Americans support that approach.” – Remarks in Anaheim at the Annual Convention of the California Peace Officers Association (May 24, 1976)

“I have stated on a number of occasions I support the death penalty at the Federal level for espionage, treason, et cetera.” – The President’s News Conference (July 9, 1976)

“The society which fails to recognize this as a reasonable ordering of its priorities must inevitably find itself, in time, at the mercy of criminals. America was heading in that direction in the last decade, and I believe that we must not risk returning to it again. Accordingly, I am proposing the re-institution of the death penalty for war-related treason, sabotage, and espionage, and for all specifically enumerated crimes under Federal jurisdiction from which death results.” – State of the Union Message to the Congress on Law Enforcement and Drug Abuse Prevention (March 14, 1973)

Another Democratic president, Lyndon Johnson, also spoke of the importance of protecting the freedom of dissent:

“The trouble is that in taking freedom for granted we often forget how revolutionary a concept is involved in the constitutional protection of the right of opposition. Even in our Anglo-Saxon legal tradition, opposition was until a few centuries ago considered treason.” – Remarks at a Dinner Honoring Senator Everett McKinley Dirksen. (November 20, 1967)

Johnson and John Kennedy before him spoke of how extremists will be quick to level charges of treason:

“I think that–I know in my heart that this is how Georgia will vote. I was in an election campaign 4 years ago and I returned to my home State in the last days of that campaign. We went to the hotel to wash up before we went to a luncheon meeting, but the entrance was blocked and the hecklers were there. They harassed us and they hounded us and they knocked my wife’s hat off. They spit on us, they called us traitors, and they called us treason artists. And they had ugly signs and they dealt not in a single issue that we were debating. They had only to talk about personalities and little petty things because they were little, petty people.” – Remarks at a Rally in Augusta, Georgia (October 26, 1964)

“And under the strains and frustrations imposed by constant tension and harassment, the discordant voices of extremism are once again heard in the land. Men who are unwilling to face up to the danger from without are convinced that the real danger is from within. They look suspiciously at their neighbors and their leaders. They call for “a man on horseback” because they do not trust the people. They find treason in our churches, in our highest court, in our treatment of water.” – Address in Los Angeles at a Dinner of the Democratic Party of California (November 18, 1961)

Trump is not the only president to suggest members of an opposing political party were treasonous.

In the 1950s, in his defense of Democrats, Dwight Eisenhower did make the charge against another party:

“The only treasonous party we have is the Communist Party.” – Address at the American Legion Convention (August 30, 1954)

Eisenhower was speaking in earnest, but it may be argued that Trump was not when delivering his remarks on Monday.

Some presidents have joked about the crime, including Clinton:

“Somehow Jefferson overcame the attack and went on to become President. And thank goodness, today Americans consider a good French meal to be a supreme treat, not high treason.” – Remarks at a Dinner Honoring President Jacques Chirac of France (February 1, 1996)

But, to be sure, Trump’s critics did not give him a pass for the remarks – meant to be tongue in cheek or otherwise. And it is also not clear how many of the president’s supporters believed it was a joke.