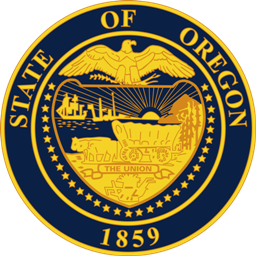 Not surprisingly, South Dakota’s 2022 gubernatorial race is rated “solid” or “safe” Republican by the nation’s leading prognosticators (no Democrat has currently filed for the race).

However, South Dakota’s 2018 gubernatorial election was the sixth closest among the 36 on the ballot that cycle with Democratic nominee Billie Sutton coming just 3.4 points shy of winning the open seat as his party lost 89 of 105 state legislative districts.

It marked the first election since 1986 in which Democrats came within 14 points of the Republican nominee in the state.

Meanwhile, even though Democrats have amassed nearly as long of a string of victories for governor in Oregon, the GOP has come within eight points during each of the last six cycles since 2002.

The short story is that, even in deep red and blue states, candidates still matter – particularly in elections for state office.

To be sure, it is more difficult today for state politicians to shed their association with the national party in order to have greater appeal to crossover voters in states with an unfavorable partisan lean.

That said, there are still plenty of examples of Democratic and Republican governors of deep red and blue states respectively (e.g. John Bel Edwards in Louisiana, Laura Kelly in Kansas, Charlie Baker in Massachusetts, Larry Hogan in Maryland, and Phil Scott in Vermont).

And thus, early in an election cycle, it is sometimes unclear which states will ultimately be competitive on Election Day.

In fact, less than a quarter of the states in the nation are currently coming off two or more consecutive elections for governor decided by single digits.

The aforementioned Oregon and Wisconsin lead the way – each seeing winning margins of less than 10 points for the last six cycles.

Oregon’s last six elections for governor have been decided by an average of 5.3 points with Democrats winning all of them.

Florida – home to the closest gubernatorial wins during the 2014 and 2018 cycles and the fourth narrowest in 2010 – has the third longest single-digit streak at four in a row.

Of these dozen states with current streaks of two or more races for governor decided by less than 10 points, Republicans have swept them in two states (Florida and Georgia), Democrats have won them all in four states (Connecticut, North Carolina, Oregon, and Virginia), and no party has run the table in the remaining six.

In addition to South Dakota, six other states hosted a gubernatorial election with a single-digit victory margin in its most recent cycle: Iowa, Louisiana, Mississippi, Nevada, Ohio, and South Carolina. 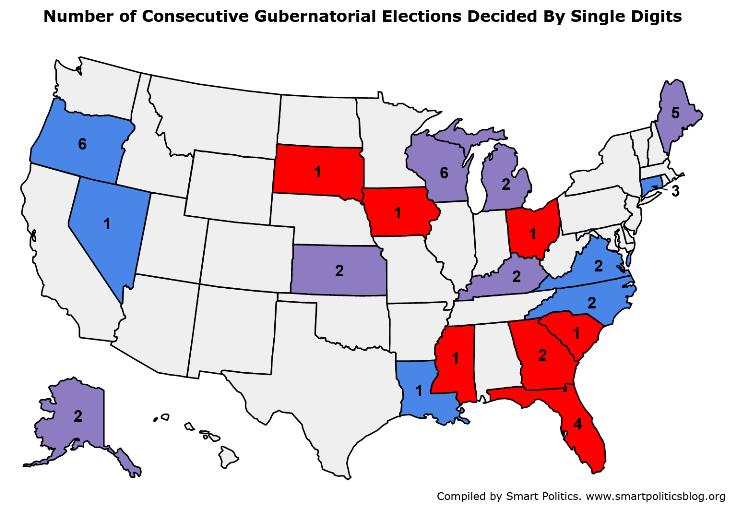