The chamber will see a record low in the direct election era, even if each party wins a seat in Georgia

The unseating of three incumbents in the 2020 U.S. Senate elections may or may not have impacted partisan control of the chamber come January. That will depend on the outcome of the two runoffs in Georgia on January 5th.

However, the defeat of Democrat Doug Jones in Alabama, Republican Cory Gardner of Colorado, and appointed GOPer Martha McSally in Arizona ensures the U.S. Senate will plummet to a new low…in the number of split partisan state delegations.

A frequent refrain heard in D.C. is that members on opposite sides of the aisle no longer talk to each other, and members are therefore less personally invested in striking deals with the other side as well as moderating their tone and ultimately their policy positions.

Compounding the problem is the trend of fewer and fewer states being represented by more than one party in the U.S. Senate – thus providing fewer opportunities for members to build bipartisan bridges even within a state delegation.

As things currently stand, only seven states will not be represented by the same political party in the U.S. Senate in 2021 – down from 10 in the 116th: Maine, Montana, Ohio, Pennsylvania, Vermont, West Virginia, and Wisconsin. 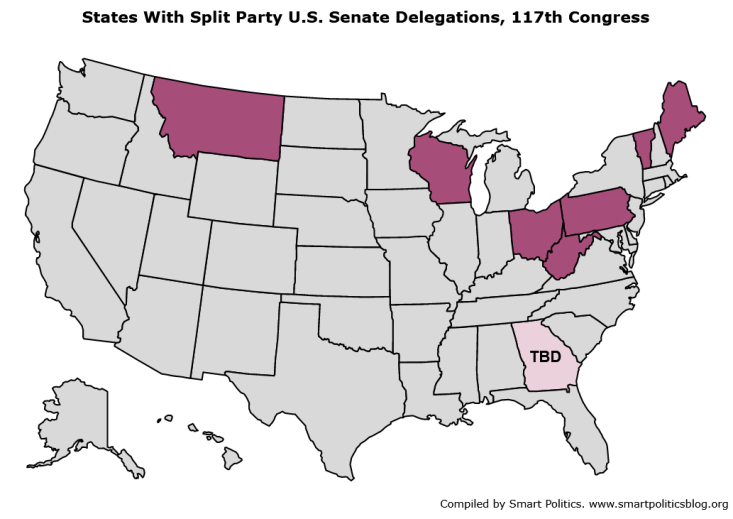 And one of those states – Vermont – still has a unified caucus with independent Bernie Sanders joining his fellow Democratic delegation member Patrick Leahy.

Even if Democrats and Republicans each claim one seat in the Georgia runoffs, the 117th Congress would still have the fewest split party state delegations in the U.S. Senate since the start of the direct election era.

Prior to the 117th, only one congress has convened with fewer than 10 split-delegation states during this period – the 84th Congress following the Election of 1954.

In addition to the 116th, only two other congresses convened with fewer than a dozen split-delegation states in the direct election era: the 64th (after the Election of 1914) and the 77th (1940).

Following the 1940 election, there were also 11 states with split delegations – 10 states with one senator from each major party (California, Connecticut, Idaho, Illinois, Indiana, Massachusetts, Michigan, New Jersey, Pennsylvania, South Dakota) and one state with Republican and Progressive senators (Wisconsin).

However, in late 1941, Colorado Democratic U.S. Senator Alva Adams passed away and Republican attorney Eugene Milliken was appointed to the seat to join Democrat Edwin Johnson for the 12th split-delegation state in the 77th Congress. 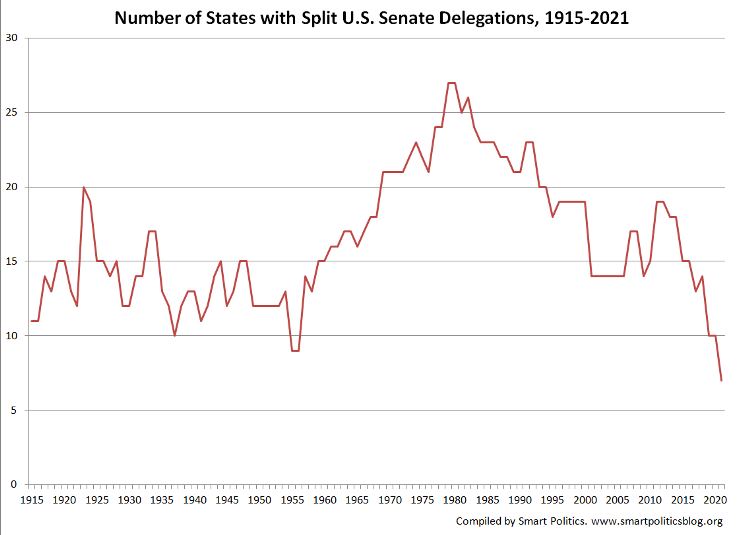 From the 64th through the 116th Congresses, there have been an average of 16.5 states with split U.S. Senate delegations, with a peak of 27 states during the 96th Congress following the Election of 1978.