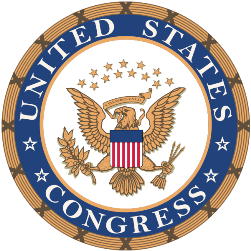 Recent Smart Politics reports have highlighted electoral trends signalling the demise of competitive, battleground states: three dozen states set or extended all-time Democratic or Republican presidential winning streaks, the governor and both U.S. Senators in two-thirds of states are now from the same political party, and – most jarringly – the 117th Congress has the fewest split U.S. Senate delegations in history.

The 117th Congress was also convened on Sunday with 15 state delegations with each U.S. Representative and both U.S. Senators from the same party – tied for the largest number of states since the late 1950s.

That marks a net increase of one state from the 116th Congress and matches a 60-year high last seen during the 115th Congress.

In the 2020 cycle, Democrats lost their monopolistic control in New Mexico when Republican Yvette Herrell unseated freshman Xochitl Torres Small in the state’s 2nd CD. Republicans, meanwhile, regained control of all congressional seats in Oklahoma and Utah – knocking freshmen out of office in the 5th (Kendra Horn) and 4th (Ben McAdams) CDs respectively. 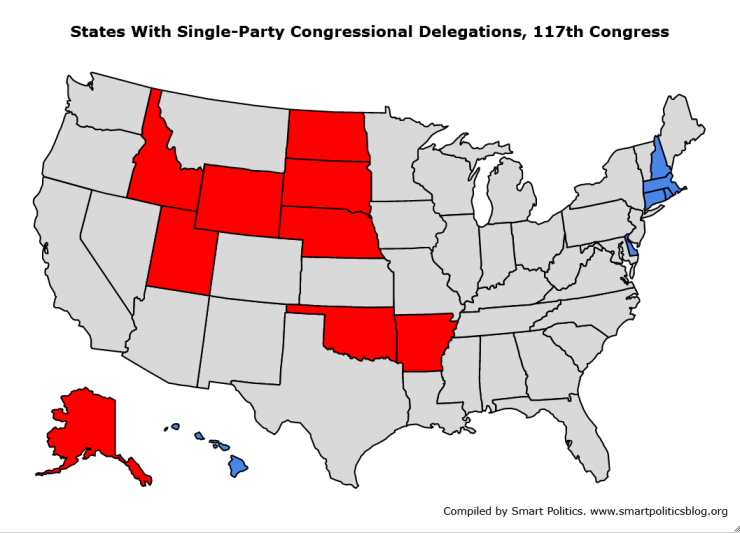 At least 13 states have been represented by one party in congress for each of the last four congresses.

By contrast, after the 2008 election, there were just six states with single-party representation in Congress: Hawaii, Massachusetts (until Scott Brown won a 2010 U.S. Senate special election), New Mexico, North Dakota, and Rhode Island for the Democrats and Wyoming for the Republicans. That marked the lowest number since 1993 when there were just five single-party states: Hawaii, North Dakota, and West Virginia for the Democrats and Alaska and Wyoming for the GOP.

The nine Republican-controlled states in the 117th Congress is tied with the 115th Congress for its peak since the 84th Congress (1955-1957) when every seat in nine states appeared in the Republican column: Iowa, Kansas, Maine, Nebraska, New Hampshire, North Dakota, South Dakota, Utah, and Vermont.

The recent rise in single-party representation in the states reflects what was quite common during the early- to mid-20th Century. 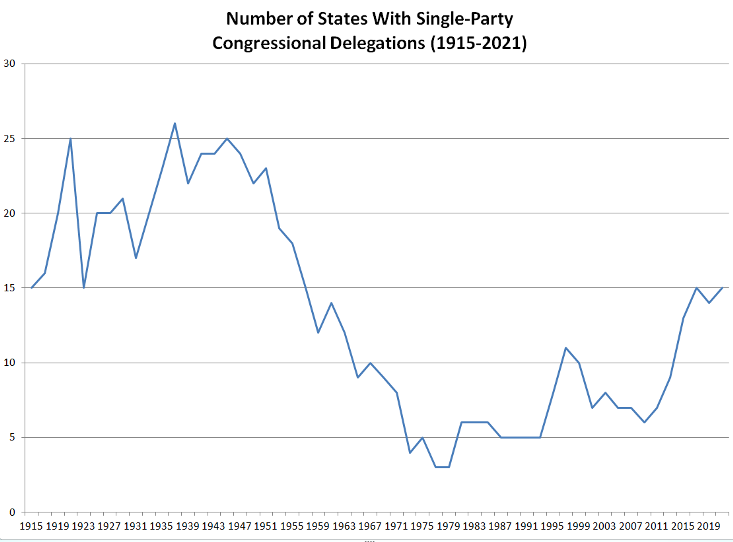 Overall, states have sent single-party delegations to Congress 718 times since the 64th Congress (1915-1917). A total of 431 of these were all-Democratic and 287 were all-Republican.

Nearly every state has sent at least one single-party congressional delegation to D.C. during this 100-plus year span with the only exceptions being California, Illinois, Missouri, New Jersey, New York, Ohio, and Tennessee.

North Dakota is the only state to have logged at least 10+ Congresses with its seats under control of Democrats (12 times) and Republicans (24 times).

Democrats dominated the South for many decades during this span with southern states holding six of the top seven slots for the most cycles with all-Democratic delegations since the 64th Congress: Mississippi (28), Georgia (27), Louisiana (27), Arkansas (26), Alabama (25), and South Carolina (25). Rhode Island (27) is also tied for second on this list.

Many states with moderate to large populations in the Midwest and Northeast saw the Republican Party hold every congressional seat at some point during the last century:

Overall, Vermont has tallied the largest number of cycles with an all-Republican delegation since 1915 with 29 followed by New Hampshire (27), Idaho (25), North Dakota (24), and Wyoming (24).

Several states in the 117th Congress are one seat shy of single-party representation with the GOP one seat away in nine states (Alabama, Iowa, Kansas, Kentucky, Louisiana, Mississippi, Montana, South Carolina, West Virginia) and Democrats one seat away in five others (Maryland, Nevada, New Mexico, Oregon, Vermont).

Pending redistricting and retirements, a handful of these 14 states have a reasonable chance of coming under single-party representation in future congresses – Iowa, Kansas, Montana, and West Virginia for Republicans and New Mexico and Vermont for the Democrats.