One more state could join this list during the 2022 cycle

This report continues Smart Politics’ ongoing review of the deepening partisan divide in states across the nation.

Over the last year, Smart Politics documented the rise of single-party state congressional delegations, how major parties currently have record U.S. Senate winning streaks in two-dozen states, how two-thirds of states have governors and U.S. Senators from the same political party, how the 117th Congress has the fewest split U.S. Senate delegations in history, and how one party controls every elected executive office in all but 14 states.

In this report, the winning streaks of Democrats and Republicans in gubernatorial races are highlighted – with the nation’s major parties currently holding or tied with the all-time longest winning streaks for the office in 18 states.

Republicans are particularly enjoying heady times in elections for the top executive office in the states – accounting for 13 of these 18 states.

Republicans are expected to see that streak extended in Arkansas next year but come up short in Maryland’s open seat race.

The GOP could also tie its all-time mark of four consecutive victories if its gubernatorial nominee is victorious in Arizona in 2022 (1986-1998).

Meanwhile, Democrats currently hold their longest ever winning streaks for governor outright in four states: Oregon (10 in a row), Washington (10), Delaware (eight), and California (three – not counting the 2021 recall).

At three straight victories, Minnesota Democrats are tied for their best run with two other periods back when the term of office was just two years (1904-1908, 1954-1958). The party will try to eclipse that mark next year. 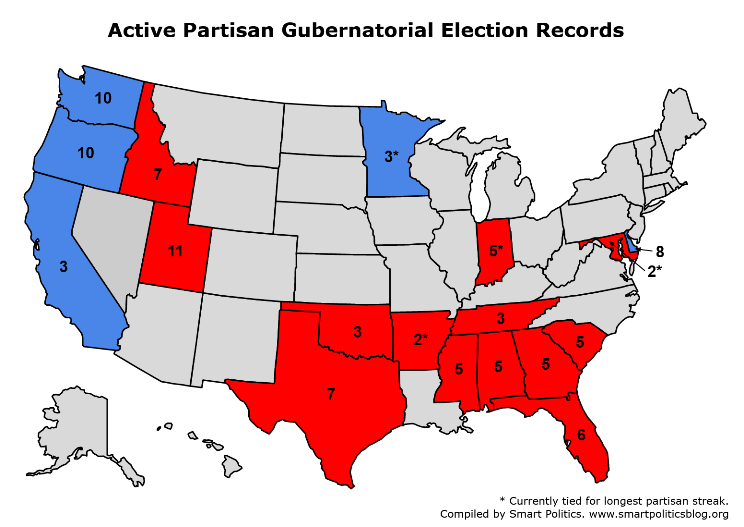 Just two states are located in the Midwest (Indiana, Minnesota) and two in the Northeast (Delaware, Maryland – though each is assigned to the southern region by the U.S. Census Bureau).